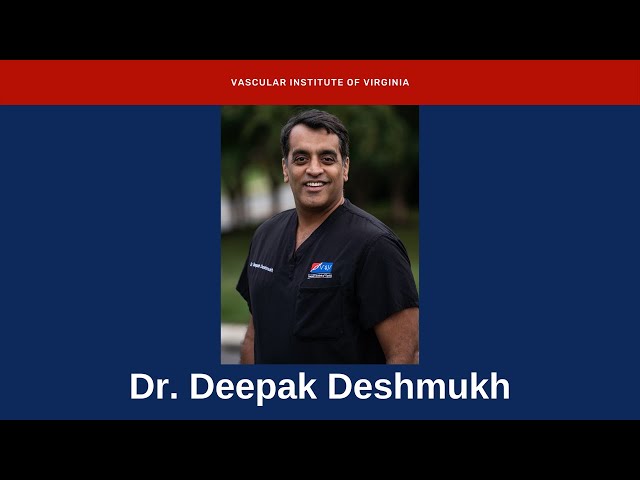 Dr. Deepak Deshmukh is a board-certified General & Vascular Surgeon at the Vascular Institute of Virginia. Dr. Deshmukh completed his undergraduate degree in Biology at Boston College, and went on to complete his Master’s degree in Medical Sciences at Boston University. Dr. Deshmukh graduated from the Philadelphia College of Osteopathic Medicine in Philadelphia, PA. He completed his surgical residency at Robert Packer Hospital and Guthrie Clinic in Sayre, PA with additional training in Transplant and Pediatric Surgery at The University of Pittsburgh Medical Center. He completed his Vascular Surgical Fellowship at the University of Rochester’s Strong Memorial Hospital.

Dr. Deshmukh has extensive research experience in the fields of endovascular repairs, stenting, and endarterectomy treatments for conditions such as End Stage Renal Disease, Peripheral Artery Disease, Carotid Artery Disease, Thoracic Aortic Aneurysms, and Abdominal Aortic Aneurysms. He has had a busy clinical practice in the Hampton Roads area of Virginia since 2008.

Dr. Deshmukh is currently a Lieutenant Colonel in the U.S. Army Reserve. He was originally commissioned in 2001. He has served in Operation Iraqi Freedom in Tikrit and Mosul Iraq, as well as Operation Enduring Freedom in Afghanistan on multiple tours of duty. While serving in the U.S. Army, Dr. Deshmukh was awarded the Army Commendation Medal during Operation Iraqi Freedom and Operation Enduring Freedom. During his Deployments he has served as the Deputy Director of Clinical Services (DCCS) for a Combat Support Hospital and Forward Surgical Team. He has served with the U.S. Army in Honduras, El Salvador and Colombia on numerous humanitarian missions as well.

Dr. Deshmukh is a Fellow of the American College of Surgeons, and holds active memberships with the Society of Vascular Surgery and Society of Clinical Vascular Surgery. He has held faculty appointments at SUNY Upstate Health Science Center and the Eastern Virginia Medical School Department of Surgery. He has a passion for teaching Medical Students, Residents and Fellows. In his free time, Dr. Deshmukh enjoys tennis, swimming, and practicing Tae Kwon Do as a black belt.

Get in Touch with Us